In the coaching community we are sometimes susceptible to thinking better coaching is a lot about finding better exercises. There is, of course, far more to coaching than just organising and supervising exercises, and to delivering an effective and engaging session. However, they are important and I will offer some ideas from my experiences on how to tailor exercises suitable for the topics and players you are coaching.

The type of exercises a coach decides to use will depend on their coaching philosophy which will have been defined by their own experiences and research. My personal coaching philosophy utilises a training methodology based around modified game situations (discussed previously here) and I also try to integrate the findings from research on learning to enhance players’ development (discussed previously here).

I like this type of training because game situations place demands on the interacting technical, tactical, physical and psychological aspects simultaneously, as occurs in a match. Plus its enjoyable which is the key reason futsal exits as well as being essential to creating an environment that promotes learning.

With this type of training a coach’s guidance and corrections are still vital but most of the players’ learning comes from experiencing situations and improving through the process of adaption to the demands these situations place on them. An approach that has been referred to as ‘letting the game be the teacher’.

This, therefore, requires exercises that are designed appropriately. One requirement is the exercises cause the specific game situations you have chosen to focus on to be continuously repeated. This is so the players go through the loop of evaluation of the situation, decision, outcome and then feedback enough times to be able to work out the solutions that are most effective.

This quantity of repetition through this loop in a specific phase of play that you want to improve the players in wouldn’t be present in a full match. This is one of the reasons exercises are used in sessions (for an untrained coach a session of only full matches can be a good option as you know the players are learning relevant skills).

If the coach anticipates that the players may not discover or consider the appropriate solutions they may want the exercise to guide or nudge the players into executing them. Through experiencing these incited solutions multiple times, the aim is they acquire the knowledge and visual pictures that become ingrained for future use. 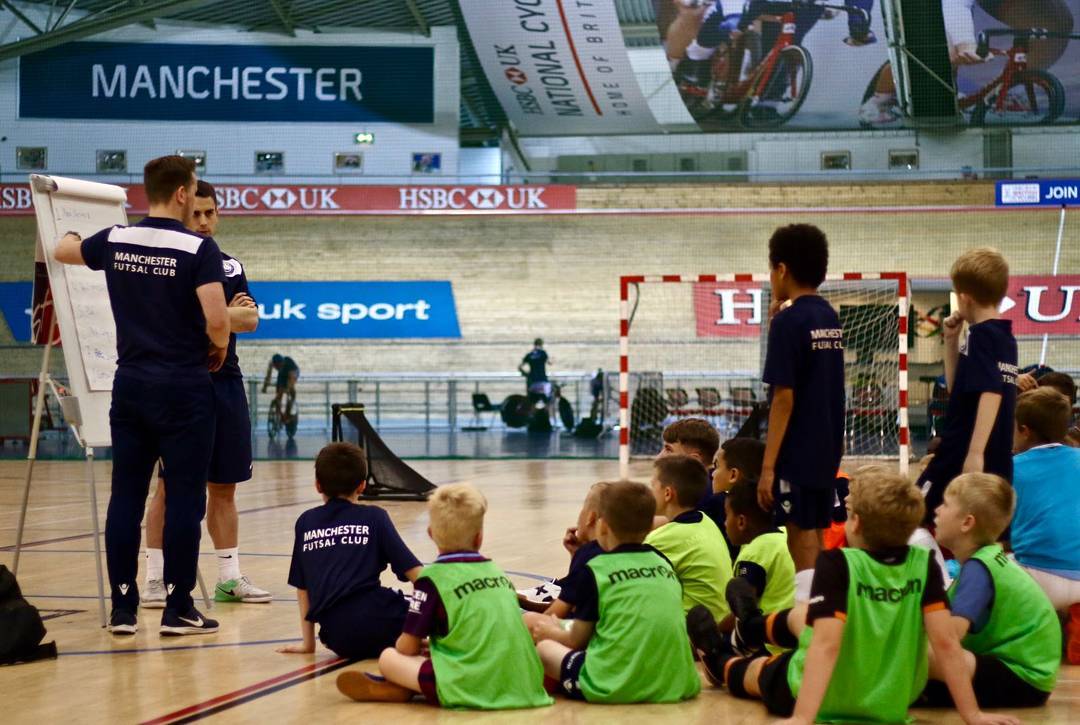 You can find exercises from various sources or you can design your own from scratch. There is a continuum between these two where the middle point would be using other coaches’ exercises for inspiration but heavily modifying them to your groups’ needs.

Using other coaches’ exercises can provide fresh ideas and a way to benefit from the knowledge of those more experienced, especially useful for beginner futsal coaches. However, using a strictly ‘copy and paste’ method should be implemented with very careful consideration as the exercises were not tailored to the unique needs of your group. Every coach has experienced how the same exercise can transpire very differently with two distinct groups. An ‘off-the-shelf’ exercise can provide some inspiration but will often need to be modified to your group’s requirements.

Designing your own exercises allows you to better recreate the specific situation you want your players to practise and to do this with consideration of the individual characteristics of your training group. With a new exercise it requires visualising how the players will carry out the exercise and thinking how players might ‘game’ it to score points that may not be appropriate to the aspect you’re trying to work on. This is one of the risks of new exercises but once you put them into action, you will gain feedback and can refine the exercise to improve its effectiveness.

Below I have put some basic principles when designing or adjusting exercises including how to manipulate the constraints (the rules such as playing areas or zones, how points are scored, goals used, player numbers etc.) in order to control the outcomes, avoid working on areas that aren’t in your objectives and to challenge your players appropriately. These can be used both during the planning and implementation of exercises.

9) Work on positional attack/defence instead of counter attacks

8) Work on counter attacking instead of positional attack/defence

a) Introduce a maximum pass limit or time limit before the attacking team must score.
b) Allow the attacking team to score in the goals on both sides/directions.
c) If it is an attacking overload situation, have recovering defenders so slow play is punished with the loss of the numerical advantage

7) Work on open play and not set plays

Ball always starts from goalkeeper when the ball goes out of play. Also good for when you want to keep the intensity of the exercise high or are working on counter attacks.

5) Increase the variability that is present in a real game

a) If you are working on an exercise with set start positions, vary them. For example, in 2v1 counter attacking exercises often start with an attacker on each wing and a defender in the middle. However, 2v1 situations in real matches occur with a great variety of player positions. The maximum variety, with the exception of a normal match, you can achieve is through exercises that are real matches where through some rule the situation you want to create will happen in an almost random moment. For 2v1s a game of 2v2 in half court but when the coach blows the whistle the defender of the ball carrier must momentarily sit down would do this.
b) Create a link into the situation you want to work on. For example, a positional exercise that transitions into a 2v1 counter attacking situation. By doing this you include the unexpectedness and disorganisation that occurs in the real game as well as the link between different phases of play.

4) Encourage movement of players in attack

3) Increase the intensity
a) Reduce number of players or size of the court as this means they are more involved and their movements will have to be more intense.
b) Reduce the work:rest ratio of the exercise so the players work for short periods followed by complete or near full recovery.

Point scored for making a certain number of consecutive passes. This could be when you’re working on a pressing in defence or for attackers overcoming pressing.

a) Usually when you first introduce a team rotational movement to create space it is unopposed. However, this is unlikely to transfer the knowledge of the movements into players applying it into a game situation due to it being too simplistic. One way to try to bridge this gap is that the defenders are only allowed to shadow the attackers (no tackling/intercepting) while the attackers do the movement at the start of the exercise. After the first rotation or once the coach blows their whistle, the defenders become fully active. By doing this, it helps create a realistic image of the movement in a game situation for the attackers.
b) An alternative is to say defenders can only intercept and not tackle which gives the ball carrier a bit more time to think and can also cause the defenders to over anticipate which leaves space behind that the rotational movement can take advantage of.

I hope you find some of these useful to designing exercises that are more effective and if you wish to share any principles you use so myself or other readers can learn, please do so in the comments. Thanks!

After the success of the Futsal Insights Seminar in 2017, we will return to Manchester on Saturday 2nd March 2019 with a conference that features an extensive line-up of leading experts in the sports industry to discuss futsal development.

A range of topics will be explored to provide an opportunity for the futsal community to learn best practice and practical insights. The central theme will be around developing a thriving and sustainable club.

The full-line up will be revealed soon but the first speaker has already been announced in Leicester Arena Director and Leicester Riders Basketball Club Chairman Kevin Routledge (read more here). He will discuss how they were able to construct their own 2500 seater venue, create one of Britain’s most successful and enduring basketball franchises and develop a league that is gaining a growing audience

Tickets can be purchased now with an early bird discount at £65 each but will revert to the standard price of £85 each once the first 50% of tickets are sold. There is a further multi-buy discount with any purchase of 3 or more tickets available at £60 each. They can be purchased at FutsalInsights.com or the Futsal Insights Conference 2019 Facebook event page. 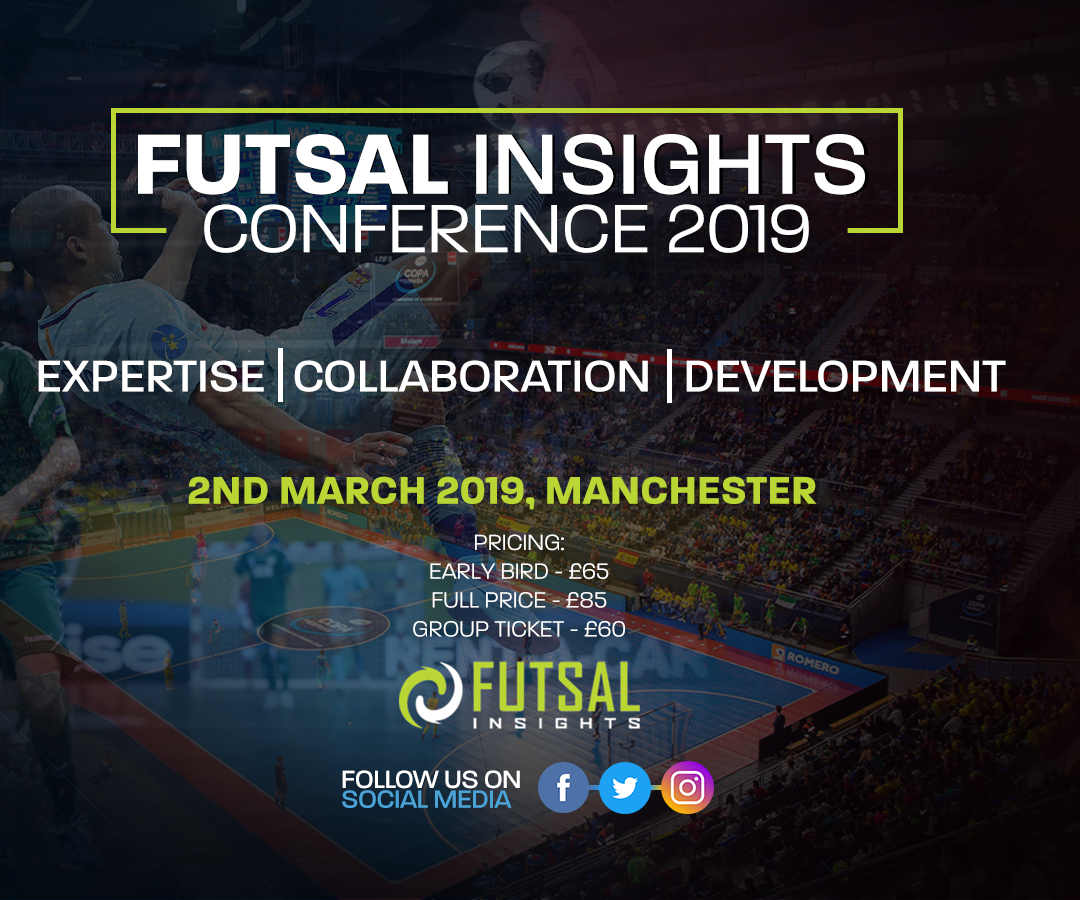